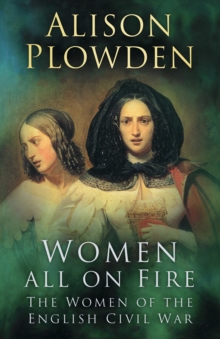 Women all on fire : the women of the English Civil War

'Readers will enjoy Plowden's combination of a fine gift for storytelling with sound research and an infectious affection for her troop of intrepid ladies.' Miranda Seymour, Sunday Times. 'Our women are all on fire, striving through a gallant emulation to outdoe our men and will make good our yielding walls or loose their lives' wrote a chronicler of the siege of Chester in 1645.

In the war between king and parliament, the women of England played an active part.

Some displayed a courage so far above their sex as to suprise and disconcert their men.

The Royalists included Queen Henrietta, who went abroad to raise money for the cause, and Mary Bankes who held Corfe Castle for the king with her daughters, heaving stones and hot embers over the battlements at the attacking Roundheads.

On the opposing side, Lady Brillia Harley guarded Brampton Bryan Castle in Herefordshire against the Royalists and Anne Fairfax, wife of Cromwell's northern general, who was taken prisoner by the Duke of Newcastle's troops after Adwalton Moor.

Also featured are the oyster wenches of London, who laboured beside the men digging trenches around the City; the women who helped prisoners escape, such as Anne Mu