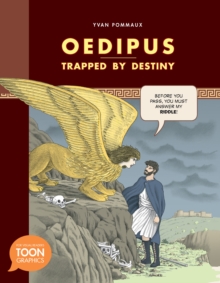 Oedipus is born to a terrible fate. Can he escape it to save himself and his family? An oracle makes a ghastly prediction: the young prince will kill his father and marry his mother.

Horrified, King Laius decides to kill his infant son before he can ever grow up to fulfill that prophecy.

But destiny can't be avoided so easily. That child is Oedipus, who lives to lead a country. Discover his true family, and see how his own rash actions have only furthered the gods' plans.

With unique flair and a wealth of details, cartoonist Yvan Pommaux brings to a new generation the tragic tale, which has thrilled and terrified us for thousands of years.

A must to nourish young readers' imaginations. Yvan Pommaux is a beloved children's book author in France who is known for his detailed research and illustration style.

In 1995, he was awarded the prestigious Grand Prix de la Ville de Paris.

Three schools have been named after him as a testament to the joy and educational appeal of his work for children.