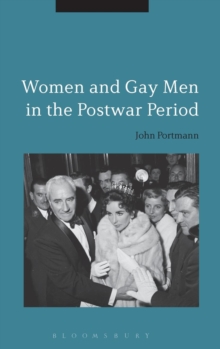 Women and gay men in the postwar period

Friendships between women and gay men captivated the American media in the opening decade of the 21st century.

John Portmann places this curious phenomenon in its historical context, examining the changing social attitudes towards gay men in the postwar period and how their relationships with women have been portrayed in the media.

As women and gay men both struggled toward social equality in the late 20th century, some women understood that defending gay men - who were often accused of effeminacy - was in their best interest.

Straight women used their influence with men to prevent bullying and combat homophobia. Beyond the bureaucratic fray, women found themselves in transformed roles with respect to gay men - as their mothers, sisters, daughters, caregivers, spouses, voters, employers and best friends.

In the midst of social hostility to gay men during the AIDS crisis of the 1980s and 1990s, a significant number of gay women volunteered to comfort the afflicted and fight reigning sexual values.

Famous women such as Elizabeth Taylor and Barbra Streisand threw their support behind a detested minority, while countless ordinary women did the same across America.

Portmann celebrates not only women who made the headlines but also those who did not. Looking at the links between the women's liberation and gay rights movements, and filled with concrete examples of personal and political relationships between straight women and gay men, Women and Gay Men in the Postwar Period is an engaging and accessible study which will be of interest to students and scholars of 20th- and 21st century social and gender history.