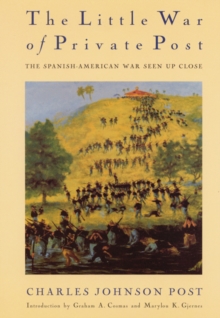 The Little War of "Private Post" : The Spanish-American War Seen Up Close

'This posthumous publication on the War with Spain is a generally straightforward, often amusing, frequently colorful, and occasionally gripping narrative of a New York artist-volunteer who landed with the Fifth Army Corps at Siboney, rushed to aid the Rough Riders at Las Guasimas, fought through the horrors of Bloody Ford and Hell's Pocket, participated in the siege of Santiago, and survived the fever-ridden aftermath at Montauk Point' - "Military Affairs".

Charles Johnson Post (1873-1956) received not one but two handmade red flannel bellybands for protection against tropical fevers when he enlisted as a private in 1898 with the 71st New York Infantry.

Setting off for what he later termed 'the little wars that are the mere trivia of history,' he came back to write a mild chronicle of many little men who were painting on a big canvas, and of their little epic routines of life, with a common death at their elbow.

It is only the little, but keen, tribulations that made the epic routine of an old-fashioned war.

Graham A. Cosmas is chief of the General History Branch at the U.S. Army Center of Military History. He is the author of "An Army for Empire: The United States Army in the Spanish-American War".

Mary Lou Gjernes is chief of the Collections Branch at the U.S.