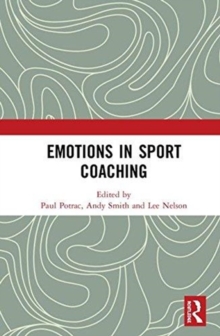 Emotions are widely acknowledged as an inextricable feature of human behaviour, experience and interaction.

They are, arguably, the glue that can bind people together or, alternatively, drive them apart.

While social scientists have paid increasing attention to the centrality of emotions in social and pedagogical relationships, the sport coaching literature has remained largely free of emotions.

Indeed, there remains a paucity of scholarship exploring how emotions such as excitement, joy, anger, anxiety, guilt, pride and embarrassment may be (re-)produced in, as well as through, the social interactions and contextual relations that constitute coaching.

Similarly, we know very little about how these, and other, emotions are embodied in the everyday practice of individuals and groups.

The aim of this book was to generate new and exploratory insights into the emotions that are an inherent feature of social relations and individual experience in coaching.

Using a variety of psychological and sociological frameworks, the chapters in this book not only explore the interconnections between emotion, identity, cognition and learning, but they also serve as a platform for stimulating further inquiry in this topic area.

The chapters were originally published in a special issue of Sports Coaching Review.