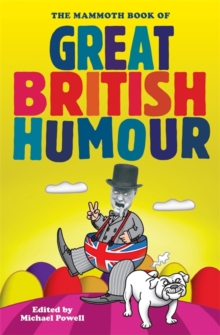 A doorstopper of a collection of the very best of both contemporary and classic British wit and humour. From Monty Python's 'Nudge, nudge, wink, wink, say no more . . .' to Dan Antopolski's 'Hedgehogs. Why can't they just share the hedge?'. From George Bernard Shaw to Michael McIntyre, from Eric Morecombe to Omid Djalili, and from Oscar Wilde to Jimmy Carr, a side-splitting look at Britain, the British and life in general.

Including these gems from Britain's finest comedians:I was delighted to learn that my friend's schadenfreude was not as satisfying as mine.

Armando Iannucci. I went on a girls' night out recently. The invitation said 'dress to kill'. I went as Rose West. Zoe LyonsFor a while I was the perfect mother. Then the Pethidine wore off. Jenny Eclair. My girlfriend was complaining last night that I never listen to her. Or something like that. Jack Dee. Why do dogs always race to the door when the doorbell rings because it's hardly ever for them?

Harry Hill. Arse-gravy of the very worst kind. Stephen Fry on The Da Vinci Code. You have to come up with this shit every year. Last week I just wrote "I still love you, see last year's card for full details." Michael McIntyre on Valentines Day. I went to the doctor and he said, 'You've got hypochondria.' I said, 'Not that as well!'Tim Vine. I have the body of an eighteen year old. I keep it in the fridge. Spike Milligan. When someone close to you dies, move seats. Peter Kay. My neighbour asked if he could use my lawnmower and I told him of course he could, so long as he didn't take it out of my garden.

Eric Morecambe. My dad's dying wish was to have his family around him.

I can't help thinking he would have been better off with more oxygen. Jimmy Carr. Eighty-two point six per cent of statistics are made up on the spot.

Vic Reeves. A bird in the hand invariably shits on your wrist.

Billy Connolly. Getting divorced isn't like a bereavement at all, because if he's died, I'd have had me mortgage paid, and I could've danced on his grave.

Sarah Millican. My greatest hero is Nelson Mandela: incarcerated for 25 years, he was released in 1990, he's been out about 18 years now and he hasn't re-offended.

Ricky Gervais. If you want to confuse a girl, buy her a pair of chocolate shoes.

Simon Amstell. We'll continue our investigation into the political beliefs of nudists.

We've already noticed a definite swing to the left. Ronnie Barker. A guy walks into the psychiatrist wearing only Clingfilm for shorts.

The psychiatrist says, "Well, I can clearly see your nuts.