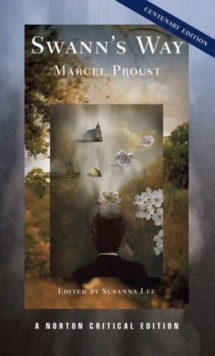 Marcel Proust's seven-volume masterpiece, In Search of Lost Time (A la recherche du temps perdu), has inspired many superlatives, among them "the greatest novel ever written" and "the greatest novel of the first half of the twentieth century." Swann's Way, the first volume of the Recherche and the most widely read and taught of all the volumes, is the ideal introduction to Proust's inventive genius.

This Norton Critical Edition is based on C. K. Scott Moncrieff's translation, which introduced the English-speaking world to Proust and was published during the author's lifetime.

It is accompanied by Susanna Lee's introduction, note on the text, and explanatory annotations. Marcel Proust was forty-two years old when Swann's Way was published, but its foundational ideas and general shape had been evolving for decades. "Contexts" includes a 1912 reader's report of the manuscript that exemplifies publishers' complicated reactions to Proust's new form of writing.

Also included are three important post-publication reviews of the novel, by Elie-Joseph Bois, Lucien Daudet, and Paul Souday, as well as Andre Arnyvelde's 1913 interview with Proust. The fourteen critical essays and interpretations of Swann's Way in this volume speak to the novel's many facets-from the musical to the artistic to its representations of Judaism and homosexuality.

Gray, and Alain de Botton, among others. The edition also includes a Chronology of Proust's Life and Work, a Selected Chronology of French Literature from 1870 to 1929, and a Selected Bibliography.