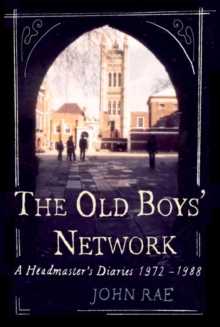 Westminster School is one of England's oldest institutions, its origins dating back to Henry VIII.

In the last century, it became a part of the British establishment, inextricably linked to the government, the church and the ruling elite.

John Rae, charismatic, strategic and unafraid to speak his mind, was headmaster of the school from 1970 to 1986 and kept a diary throughout.

This period was not without its controversies - one in which girls became full members of the school, British nationality and Christian faith were ruled no longer to be a prerequisite for a scholarship place, and the institution was growing in both size and academic standing. Rae, instinctively anti-establishment, none the less used his position to his own and his pupils' advantage.

His diaries, chronicling everything from dinners with prime ministers, to drugs and sex scandals, and more than a smattering of extraordinary and demanding pupils and parents, make for an often shocking and unputdownable read.

The Old Boys' Network captures the spirit of the times, and of a man at the very heart of British life - with humour, passion and a refreshing honesty.