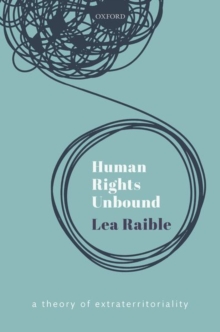 This book explores to what extent a state owes human rights obligations to individuals outside of its territory, when the conduct of that state impacts upon the lives of those individuals.

First, she argues that questions regarding extraterritoriality are really about justifying the allocation of human rights obligations to specific states.

Second, the book shows that human rights as found in international human rights treaties are underpinned by the values of integrity and equality.

Third, she shows that these same values justify the allocation of humanrights obligations towards specific individuals to public institutions - including states - that hold political power over those individuals. And finally, the book demonstrates that title to territory is best captured by the value of stability, as opposed to integrity and equality.

On this basis, Raibleconcludes that all standards in international human rights treaties that count as human rights require that a threshold of jurisdiction, understood as political power over individuals, is met.

The book applies this theory of extraterritoriality to explain the obligations of states in a wide range of cases.