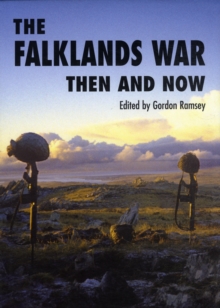 The Falklands War : then and now

In 1982, Argentina rashly gambled that a full-scale invasion of the Falklands Islands - ownership of which had been disputed with Great Britain for over a century - would put an end to years of political wrangling.

However Britain's response was to immediately dispatch a task force to recover the islands by force if necessary.

The 'conflict' which followed (a formal declaration of war was never given) lasted ten weeks from Argentine invasion to British liberation, the white heat of battle using 20th century technology contrasting with bitter hand-to-hand bayonet fighting in inhospitable conditions.

This title features eyewitness accounts by the participants of both sides and islanders that leave us in no doubt as to the ferocity of the combat on land, sea and in the air.

Its comparison photography in colour of all the battlefields, the crash sites of the aircraft shot down, the relics and the remains, together with portraits of those who lost their lives and the battlefield memorials, serve as a graphic testimony to their endeavours, 25 years after the battle. "A Roll of Honour" lists the casualties of both sides and, for the first time, the graves of all the British fallen - both on the islands and the United Kingdom - have been visited and photographed as a lasting record of all those who made the supreme sacrifice I what is most probably Britain's last colonial war.