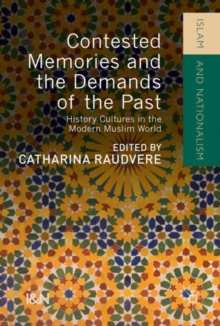 Contested Memories and the Demands of the Past: History Cultures in the Modern Muslim World

Part of the Islam and Nationalism series

This book brings together new perspectives on collective memory in the modern Muslim world.

It discusses how memory cultures are established and used at national levels - in official history writing, through the erection of monuments, the fashioning of educational curricula and through media strategies - as well as in the interface with both artistic expressions and popular culture in the Muslim world at large.

The representations of collective memory have been one of the foremost tools in national identity politics, grass-root mobilization, theological debates over Islam and general discussions on what constitutes 'the modern in the Middle East' as well as in Muslim diaspora environments.

Few, if any, contemporary conflicts in the region can be understood in depth without a certain focus on various uses of history, memory cultures and religious meta-narratives at all societal levels, and in art and literature.

This book will be of use to students and scholars in the fields of Identity Politics, Islamic Studies, Media and Cultural Anthropology.