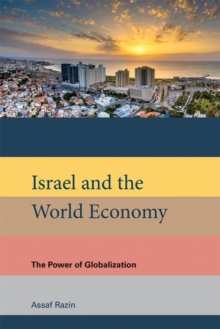 Israel and the world economy : the power of globalization

A rigorous analysis of the role played by globalization in key episodes in the development of the Israeli economy, from hyperinflation crisis to high-tech surge. Anti-globalization sentiments are rising, especially in Europe and the United States, with the increasingly integrated global economy blamed for domestic economic distress.

In this book, Assaf Razin argues that Israel offers a counterexample to this view, showing decisively positive economic effects of globalized finance, trade, and immigration.

He offers a rigorous analysis of the role played by globalization in key episodes in the remarkable development of the Israeli economy.

His findings may hold lessons for productivity-challenged advanced economies as well as for other countries such as China currently making the transition to fully developed economies. Razin examines the wave of immigration after the collapse of the Soviet Union, as highly skilled Soviet Jews migrated to Israel and the effect on income inequality; the Great Moderation of inflation and employment in advanced economies, as Israel's inflation converged in parallel with low world inflation rates; Israel's robustness in the face of the deflation shocks of the 2008 financial crisis; and technology transmission through foreign direct investment, reinforcing Israel's high-tech sector surge.

He also considers such ongoing challenges as high fertility and low labor market participation and the economic costs of the Israeli-Palestinian conflict.