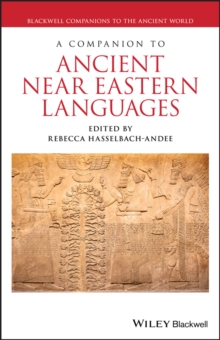 A Companion to Ancient Near Eastern Languages

Part of the Blackwell Companions to the Ancient World series

Covers the major languages, language families, and writing systems attested in the Ancient Near East

Filled with enlightening chapters by noted experts in the field, this book introduces Ancient Near Eastern (ANE) languages and language families used during the time period of roughly 3200 BCE to the second century CE in the areas of Egypt, the Levant, eastern Anatolia, Mesopotamia, and Iran. In addition to providing grammatical sketches of the respective languages, the book focuses on socio-linguistic questions such as language contact, diglossia, the development of literary standard languages, and the development of diplomatic languages or "linguae francae." It also addresses the interaction of Ancient Near Eastern languages with each other and their roles within the political and cultural systems of ANE societies.

Presented in five parts, The Companion to Ancient Near Eastern Languages provides readers with in-depth chapter coverage of the writing systems of ANE, starting with their decipherment. It looks at the emergence of cuneiform writing; the development of Egyptian writing in the fourth and early third millennium BCI; and the emergence of alphabetic scripts. The book also covers many of the individual languages themselves, including Sumerian, Egyptian, Akkadian, Hittite, Pre- and Post-Exilic Hebrew, Phoenician, Ancient South Arabian, and more.