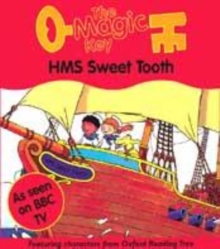 Part of the Magic key series

To coincide with the launch of The Magic Key on BBC Educational television, OUP is publishing a series of picture books based on the Magic Key adventure the characters have in each episode.

This section of the television show is also due to be broadcast on Children's BBC television soon.

When the Magic Key on Floppy's collar starts to glow, the children are off on a new adventure, whizzed by magic to wonderful lands and faraway worlds.

Biff, Wilf and Floppy land aboard HMS Sweet Tooth and are put in charge of the chocolate.

But there are pirates nearby with a hunger for sweets - and sharks circling round the ship.

The Magic Key is to be a major 26 part BBC television series featuring the characters from Oxford Reading Tree.

The Oxford Reading Tree characters are recognized by children in virtually all primary schools, and know and loved by parents and children.

This is the first time BBC Education and BBC children's have jointly invested in a children's TV series.

It will be shown on both. Transmission dates to be confirmed. The series is produced by HIT Entertainment, makers of Kipper, Percy the Park Keeper and Bob the Builder programmes.