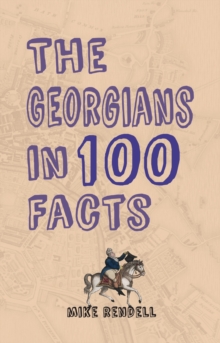 The Georgians in 100 facts

Part of the In 100 Facts series

The Georgian era is known for its lavish fashions and sumptuous food, as well as being a time of great social and political change.

It saw the birth of the Industrial Revolution, the abolition of the slave trade and the expansion of the British Empire throughout the world.

It is also an era greatly associated with the Arts - prolific writers and artists such as Shelley, Wordsworth, Austen and Turner changed the British cultural landscape. History is not just about kings and queens, or battles lost and won, it is also about the way ordinary people lived and changed the world around them.

Mike Rendell covers some of the weird and wonderful facts about the era, as well as debunking some of the myths, in easy-to-read, bite-size sections.

Find out about the vicar who discovered aspirin and the man who made his fortune from a toothbrush, alongside the personal lives of the monarchy.