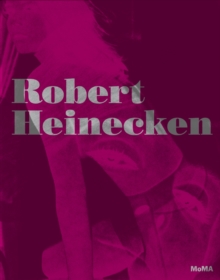 Robert Heinecken (1931-2006) was a pioneer in the postwar Los Angeles art scene who described himself as a para-photographer because his work stood `beside' or `beyond' traditional ideas of the medium.

Published in conjunction with the first museum exhibition of the artist's work since his death in 2006, this publication covers four decades of his remarkable and unique practice, from the early 1960s through the late 1990s, with special emphasis on his early experimentations with technique and materiality, which destabilized the very definition of photography.

Culling images from newspapers, magazine advertisements, and television, Heinecken re-contextualized them through collage and assemblage, double-sided photograms, photolithography and re-photography.

Although he was rarely behind the lens of a camera, his photo-based works question the nature of photography and radically redefine the perception of it as an artistic medium.

As the most comprehensive survey of Heinecken's oeuvre, this book sets his work in the context of twentieth century history of photographic experimentation and conceptual art.

An illustrated essay by conservator Jennifer Jae Gutierrez about the artist's experimental techniques, which ranged from photograms to photolithography to collage, contributes to the sparse scholarship on Heinecken's working methods.