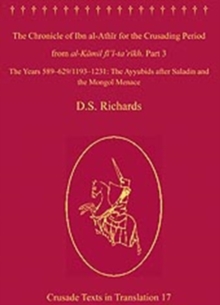 Part of the Crusade texts in translation series

The Chronicle of Ibn al-Athir (1160-1233AD), entitled "al-Kamil fi'l-Ta'rikh", is one of the outstanding sources for the history of the mediaeval world.

It covers the whole sweep of Islamic history almost up to the death of its author and, with the sources available to him, he attempted to embrace the widest geographical spread; events in Iraq, Iran and further East run in counterpoint with those involving North Africa and Spain.

From the time of the arrival of the Crusaders in the Levant, their activities and the Muslim response become the focus of the work. A significant portion of this third part deals with the internal rivalries of the Ayyubid successors of Saladin, their changing relations with the Crusader states and in particular the events of the Damietta Crusade.

As always, these events are portrayed against the wider background, with considerable emphasis on events in the eastern Islamic world, the fortunes of the Khwarazm Shahs and the first incursions of the Mongols.