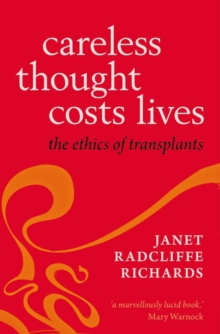 Everyone knows that transplantation can save and transform lives, but thousands die every year on waiting lists because there are not enough organs available. If more people could be persuaded to donate, more lives could be saved.

But is individual reluctance to donate the root of the problem? Individual choices are made against the background of prevailing laws, conventions and institutions, and many of those present direct or indirect obstacles to organprocurement, from both the living and the dead. If any of those cannot be justified, the deaths they cause are similarly unjustified. In The Ethics of Transplants, Janet Radcliffe Richards, a leading moral philosopher and author of The Sceptical Feminist and Human Nature after Darwin, casts a sharp critical eye over these institutional barriers to organ procurement, and the logic of the arguments offered in their defence. Her incisive reasoning forces us to confront the implications of unexamined intuitions, leads to several unexpected conclusions, and in doing so demonstrates the crucialimportance of clear thinking in public debate. Originally published in hardback as The Ethics of Transplants.