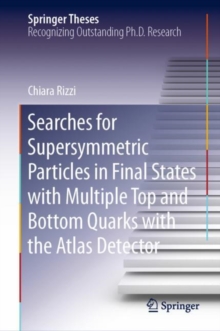 Part of the SPRINGER THESES series

This PhD thesis documents two of the highest-profile searches for supersymmetry performed at the ATLAS experiment using up to 80/fb of proton-proton collision data at a center-of-mass energy of 13 TeV delivered by the Large Hadron Collider (LHC) during its Run 2 (2015-2018).

The signals of interest feature a high multiplicity of jets originating from the hadronisation of b-quarks and large missing transverse momentum, which constitutes one of the most promising final state signatures for discovery of new phenomena at the LHC.

The first search is focused on the strong production of a pair of gluinos, with each gluino decaying into a neutralino and a top-antitop-quark pair or a bottom-antibottom-quark pair.

The second search targets the pair production of higgsinos, with each higgsino decaying into a gravitino and a Higgs boson, which in turn is required to decay into a bottom-antibottom-quark pair.

Both searches employ state-of-the-art experimental techniques and analysis strategies at the LHC, resulting in some of the most restrictive bounds available to date on the masses of the gluino,neutralino, and higgsino in the context of the models explored.