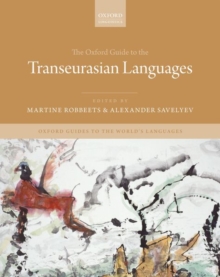 The Oxford Guide to the Transeurasian Languages

Part of the Oxford guides to the world's languages series

The historical connection between these languages, however, constitutes one of the mostdebated issues in historical comparative linguistics.

In the present book, a team of leading international scholars in the field take a balanced approach to this controversy, integrating different theoretical frameworks, combining both functional and formal linguistics, and showing that genealogical and arealapproaches are in fact compatible with one another.

The volume is divided into five parts. Part I deals with the historical sources and periodization of the Transeurasian languages and their classification and typology.

In Part II, chapters provide individual structural overviews of the Transeurasian languages and the linguistic subgroups that they belong to, while Part III explores Transeurasian phonology, morphology, syntax, lexis, and semantics from a comparative perspective.

The Oxford Guide to the Transeurasian Languages will be an indispensable resource for specialists in Japonic,Koreanic, Tungusic, Mongolic, and Turkic languages and for anyone with an interest in Transeurasian and comparative linguistics more broadly.