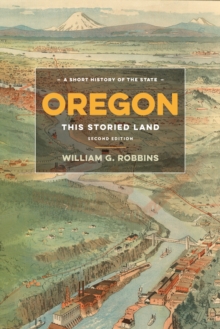 People have lived in the region for at least twelve thousand years, during which they established communities; named places; harvested fish, timber, and agricultural products; and made laws and choices that both protected and threatened the land and its inhabitants. William G. Robbins traces the state's history of commodification and conservation, despair and hope, progress and tradition.

This revised and updated edition features a new introduction and epilogue with discussion of climate change, racial disparity, immigration, and discrimination.

Revealing Oregon's rich social, economic, cultural, and ecological complexities, Robbins upholds the historian's commitment to critical inquiry, approaching the state's past with both open-mindedness and a healthy dose of skepticism about the claims of Oregon's boosters.