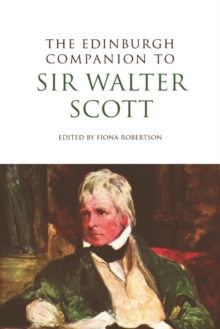 Part of the Edinburgh Companions to Scottish Literature series

Sir Walter Scott (1771-1832) is widely recognised as one of the central and defining figures in Scottish literature and in European and American Romanticism.

Fabled in his own lifetime as 'the Wizard of the North' and as the (long-anonymous) 'Author of Waverley', he played a unique role in the dissemination of an idea of Scottish culture and history.

From his early work as a collector and editor of traditional ballads to the widespread popularity and fame of his poetry and novels, and to his important writings on history, economics, folklore, and literature, Scott refashioned the literary culture of his day and continues to shape our own.

The Edinburgh Companion to Sir Walter Scott, the first collection of its kind devoted to his work, draws on the innovative research and scholarship which have revitalised the study of the whole range of his exceptionally diverse writing in recent years. Chapters written by leading international scholars provide an indispensable guide to his work in different genres and reflect the topics and concerns which are most exciting in Scott scholarship today, including his place in literary and popular culture, his experimentation and originality, his relationship to Romanticism, and the revaluation of lesser-known works.

Key Features: * The first 'Companion' to Walter Scott * Written by leading international scholars who have themselves defined modern study of Scott * Makes the most innovative and authoritative criticism of Scott accessible and available to new and more specialised readers alike * Covers the full range of Scott's writing, with chapters on his lesser-known as well as canonical works