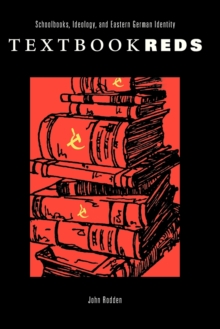 If one wants to know what children in communist East Europe were told to think about their nation and their leaders, their class enemy, and their so-called Soviet friends, no better source exists than textbooks.

In textbooks the dogmas of communism were communicated in their most simplified form and manufactured in the millions for mass consumption.

In Textbook Reds, John Rodden shows how the now-defunct German Democratic Republic (GDR) shaped generations of East German youth and how the imprint of Marxist-Leninist ideology remains today on the hearts and minds of millions of eastern Germans, more than fifteen years after the fall of the Berlin Wall.

In the GDR's campaign to win the minds of men, any critiques of the Party were equated with disloyalty and the bourgeois sins of individualism, negativism, and cosmopolitanism.

Citizens who broke free of such indoctrination still bore marks of its influence, even long after leaving school-and long after the GDR's dissolution in 1990. The second part of the book offers a glimpse of post-communism today.

Through interviews with dozens of teachers and students from contemporary eastern Germany, we see that East German faculty and students constitute perhaps the largest, most articulate, most traumatized segment of the population affected by events since 1989.

Not just a study in comparative education, Textbook Reds is also a work in the sociology of education, literary sociology, and literary history.

Rodden shows that the deepest roots of GDR society were indeed located in the institution that molded the youth of its citizens, and that the most searching questions about East German identity and the repression of its political past are in fact to be found there.