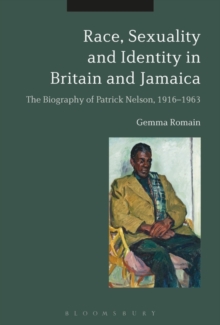 Race, sexuality and identity in Britain and Jamaica : the biography of Patrick Nelson, 1916-1963

This is the first biography of the extraordinary, but ordinary life of, Patrick Nelson.

His experiences touched on some of the most important and intriguing historical themes of the twentieth century.

He was a black migrant to interwar Britain; an aristocrat's valet in rural Wales; a Black queer man in 1930s London; an artist's model; a law student, a recruit to the Auxiliary Military Pioneer Corps and Prisoner of War during the Second World War.

Through his return to Jamaica after the war and his re-migrations to London in the late 1940s and the early 1960s, he was also witness to post-war Jamaican struggles and the independence movement as well as the development of London's post-war multi-ethnic migrations.

Drawing on a range of archival materials including letters sent to individuals such as Bloomsbury group artist Duncan Grant (his former boyfriend and life-long friend), as well as paintings and newspaper articles, Gemma Romain explores the intersections of these diverse aspects of Nelson's life and demonstrates how such marginalized histories shed light on our understanding of broader historical themes such as Black LGBTQ history, Black British history in relation to the London artworld, the history of the Second World War, and histories of racism, colonialism and empire.