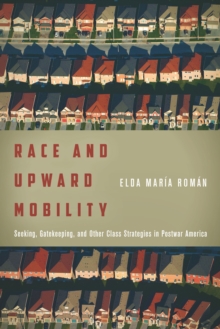 Race and upward mobility : seeking, gatekeeping, and other class strategies in postwar America

Part of the Stanford Studies in Comparative Race and Ethnicity series

Over the course of the twentieth and twenty-first centuries, Mexican American and African American cultural productions have seen a proliferation of upward mobility narratives: plotlines that describe desires for financial solvency, middle-class status, and social incorporation.

Yet the terms "middle class" and "upward mobility"-often associated with assimilation, selling out, or political conservatism-can hold negative connotations in literary and cultural studies.

Surveying literature, film, and television from the 1940s to the 2000s, Elda Maria Roman brings forth these narratives, untangling how they present the intertwined effects of capitalism and white supremacy. Race and Upward Mobility examines how class and ethnicity serve as forms of currency in American literature, affording people of color material and symbolic wages as they traverse class divisions.

Her comparative analysis sheds light on the overlaps and misalignments, the shared narrative strategies, and the historical trajectories of Mexican American and African American texts, bringing both groups' works into sharper relief.

Her study advances both a new approach to ethnic literary studies and a more nuanced understanding of the class-based complexities of racial identity.