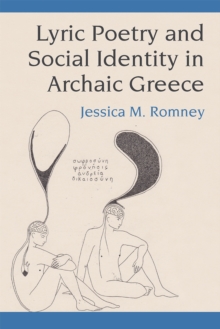 Lyric Poetry and Social Identity in Archaic Greece presents a study of identity rhetoric that examines how Greek men presented themselves and their social groups to one another.

The author examines how identity rhetoric operated in sympotic lyric: how Greek poets constructed images of self for their groups, focusing in turn on the construction of identity in martial-themed poetry, the protection of group identities in the face of political exile, and the negotiation between individual and group as seen in political lyric.

By conducting a close reading of six poems and then a broad survey of martial lyric, exile poetry, political lyric, and sympotic lyric as a whole, Jessica Romney demonstrates that sympotic lyric focuses on the same basic behaviors and values to construct social identities regardless of the content or subgenre of the poems in question.

Furthermore, the book demonstrates that sympotic lyric overwhelmingly prefers to use identity rhetoric that insists on the inherent sameness of group members; out-groups are the least common rhetorical strategy to groupness. All non-English text and quotes are translated, with the original languages given alongside the translation or in the endnotes.