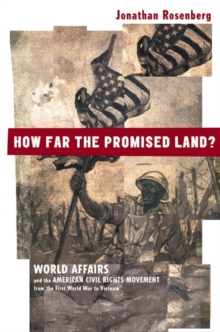 How far the promised land? : world affairs and the American civil rights movement from the First World War to Vietnam

Princeton University Press
0691007063 / 9780691007069
Hardback
323.1'196073'00904
03/10/2005
Stock expected by 16/04/2020
24 cm xiii, 316 p. : ill.
research & professional  Learn More academic/professional/technical
A fascinating account of the role of internationalism in race reform discourse... An important contribution to the literature on race and international affairs and the growing body of work on internationalism in American reform politics. How Far the Promised Land is essential reading for civil rights scholars and for scholars interested in international approaches to American history. -- Mary L. Dudziak, University of Southern California, author of "Cold War Civil Rights: Race and the Image of American Democracy" In his introduction to this innovative and engaging history, Jonathan Rosenberg a

"How Far the Promised Land?" explores the relationship between overseas developments and the most important reform movement in modern American history, the struggle for racial justice.

Interweaving civil rights history, U.S. foreign relations history, and twentieth-century international history, the book contributes to the emerging effort to reconceptualize the study of America's past by locating it in a global context.

In examining the link between international developments and the quest for racial justice, Jonathan Rosenberg argues that civil rights leaders were profoundly interested in the world beyond America and incorporated their understanding of overseas matters into their reform program in order to fortify and legitimize the message they presented to their followers, the nation, and the international community.

The book considers how a cosmopolitan group of black and white, male and female race reform leaders purposively deployed World War I and the peace settlement, the decolonization struggles in Africa and Asia, the emergence of communism and fascism, World War II, and the Cold War to help realize their domestic aspirations.Rosenberg sets this complex story against the backdrop of America's growing activism on the world stage, a development that would have significant positive implications for the domestic struggle.

Central to the work is the notion that race reform leaders were animated by the idea of "color-conscious internationalism," a distinctive outlook that would affect the trajectory and momentum of the civil rights movement.