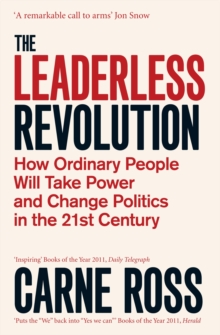 The leaderless revolution : how ordinary people will take power and change politics in the 21st century

GO ON - CHANGE THE WORLD! Wherever you are live in the world, few ordinary people would vote for a government that promised to lead them to war, that announced that they couldn't predict or control the world markets in any way, that declared ambivalence about pollution and global warming, that openly appeared to be corrupt and self-serving. And yet, it appears to many that these are the leaders we end up with.

Vacuous promises of 'change' amount to nothing, and there seems little decent, good people can do.

The world has got too big, and we can only tinker at the edges.

The Leaderless Revolution offers a refreshing way of understanding the world of the 21st century that is a clear and easily comprehensible call to all of us - that we do matter as individuals and we can effect change.

Mining the rich but little-examined histories of cosmopolitanism and anarchism, The Leaderless Revolution shows how both ideas, in combination, are relevant and necessary for the problems of today.

As grass-roots movements in the Arab world rise up against corruption and injustice, and people in the West form organisations to fight against the inequalities in our societies, Carne Ross offers not only an antidote to our global crises, but a route to fulfillment and self-realisation for us all.