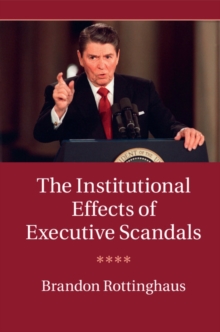 By: Rottinghaus, Brandon (University of Houston)

Although individual scandals persist in the public memory and as the subject of academic study, how do we understand the impacts of executive indiscretion or malfeasance as a whole?

What effect, if any, do scandals have on political polarization, governance, and, most importantly, democratic accountability?

Recognizing the important and enduring role of scandals in American government, this book proposes a common intellectual framework for understanding their nature and political effects.

Brandon Rottinghaus takes a systematic look the dynamics of the duration of scandals, the way they affect presidents and governors' capacity to govern, and the strategic choices executives make in confronting scandal at both the state and national levels.

His findings reveal much about not only scandal, but the operation of American politics.