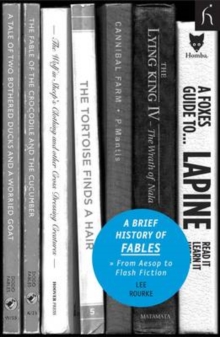 A brief history of fables : from Aesop to flash fiction

Part of the Brief histories series

'A poem should not mean,/ But be,' or so the twentieth century literati would have had us believe.

Yet from the earliest of classical narratives to modern-day e-zines, literary works have been turned to political, didactic and symbolic ends. In this groundbreaking work, Lee Rourke traces the long history of a form currently enjoying a resurgence online and in the works of some of the most talented young authors in print.

As we begin to emerge from modernism and its aftermath, fables - the briefest of narratives given the most expansive of significations - have gained in popularity.

Author and literary critic Rourke here considers the permutations of the form, from Aesop's tortoise and hare, via Plato's socio-political works and the later ribald medieval tales, to Kafka's anthropomorphism and present-day authors including Blake Butler, Joseph Young, Shane Jones and Jonathan Lethem.

A Brief History of Fables offers a bold take on the new face of literature.