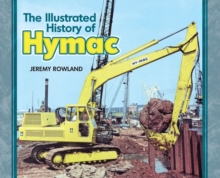 The illustrated history of Hymac

Hymac (The Hydraulic Machinery Company) manufactured hydraulic excavators from the early 1960s - indeed, for a period on British construction sites, Hymac was a generic name for excavators in much the same way that JCB stands for backhoe loaders today.

This is the first book to deal with the company. With full access to the Hymac archive, author Jeremy Rowland has been able to source a rich collection of photographs.

The book's generously-sized photos show Hymac excavators at work on building and demolition sites, quarries, railway yards, dredging and logging sites in the UK and abroad, and are accompanied by detailed captions and brief introductions to the stages of Hymac's development. Based for much of its life in South Wales, Hymac continually modified its excavators and developed new products including cranes.

Exports were important to Hymac, whose parent company Powell Duffryn won the Queen's Award for Industry.

Although the company finally ceased manufacturing excavators in 1993, many can still be found at work today.