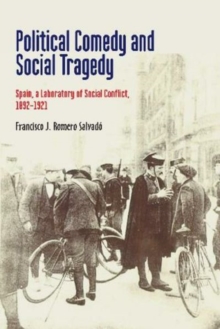 A prequel to the authors previous monographs on the Great War and the Foundations of the Spanish Civil War, this book analyses the troubled and often violent path of Spain to modernity.

During the nearly 30 years of history explored (18921921), the country appeared to be caught in a kind of Groundhog Day.

It was rocked in the 1890s by an ill-fated colonial adventure and a spiral of anarchist terrorism and praetorian-led repression, mostly in Barcelona, which culminated with the murder of the Conservative prime minister, Antonio Canovas, in August 1897.

Twenty-four years later, Spain was undergoing a similar set of circumstances: a military quagmire in Morocco and vicious social warfare, with its epicentre in the Catalan capital, which resulted in the killing of the then Conservative prime minister, Eduardo Dato, in March 1921.

The chronological framework highlights the gradual crisis, but also resilience, of the ruling Restoration Monarchy.

Francisco Romero Salvado pursues the thesis that this crisis could be largely explained by focusing on the correlation between two apparently contradictory conceptual terms, but which in fact proved to be supplementary: the extent to which the persistence of the political comedy embodied by an unreformed liberal but oligarchic order perpetuated a social tragedy.

Notwithstanding the peculiarity of the authors approach, this study rejects any notion of determinism or exceptionalism.

On the contrary, Spain was not an extraordinary case within the European context but constituted a laboratory par excellence of the turmoil which marked this age.

Indeed, a watershed period of fast technological progress, economic modernization and cultural awareness clashed head-on with traditional constitutional and liberal states that found they were unable to retain their past hegemony in the dawning era of mass politics.

The outcome was unprecedented social warfare which led in many cases to a reactionary backlash and the establishment of authoritarian formulas of governance.