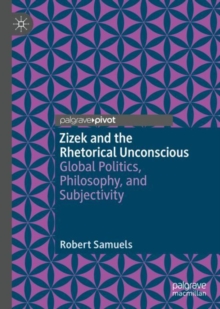 Zizek and the Rhetorical Unconscious : Global Politics, Philosophy, and Subjectivity

This book builds on a critique of Slavoj Zizek's work to outline a new theory of psychoanalytic rhetoric.

It turns to Zizek because not only is he one of the most popular intellectuals in the world, but, this book argues, his discourse is shaped by a set of unconscious rhetorical processes that also determine much of contemporary politics, culture, and subjectivity.

Just as Aristotle argued that the three main forms of persuasion are logos (reason), pathos (emotion), and ethos (authority), Samuels describes each one of these aspects of communication as related to a fundamental psychoanalytic concept.

He also turns to Aristotle's work on theater to introduce a fourth form of rhetoric, catharsis, which is the purging of feelings of fear and pity.

Adding a strong voice to current psychoanalytic debate, this book will be of value to all scholars and students interested in both the history and modern developments of psychoanalytic theory.