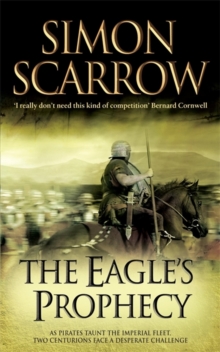 By: Scarrow, Simon,  Boulter, Russell(Read by)

Part of the Cato & Macro series

IF YOU DON'T KNOW SIMON SCARROW, YOU DON'T KNOW ROME!THE EAGLE'S PROPHECY is the powerful sixth novel in Simon Scarrow's bestselling Eagles of the Empire seires.

Cato and Macro, centurions of the Roman army, are horrified to learn that they face possible execution after the death of their commanding officer.

Fortunately, the Emperor's secretary is willing to offer them an alternative: to join the marines and hunt down a band of brutal pirates who are decimating not only Rome's reputation, but also a critical supply chain. As they discover the true horror of battle at sea, Macro and Cato must also remember their real mission: to recover from those pirates a set of scrolls that hold secrets vital to the future of the Roman Empire.

Rome will do anything to get them back... (P)2012 Headline Publishing Group Ltd