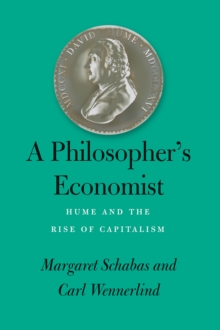 A Philosopher's Economist : Hume and the Rise of Capitalism

Although David Hume's contributions to philosophy are well known, his work on economics has been largely overlooked.

A Philosopher's Economist offers the definitive account of Hume's "worldly philosophy," and argues that economics served as a unifying thread of his life and work.

In this insightful monograph, Margaret Schabas and Carl Wennerlind show that Hume made important contributions to economic theory, for example on money, trade, and public finance.

Hume's astute understanding of human behavior provided an important foundation to his economics and enabled him to follow through on the ethical and political dimensions of capitalism.

He was also keen to connect his analysis with policy recommendations and sought to influence those in power.

While he supported commercial modernization, because it would promote peaceful relations, foster learning, and soften religious zealotry, he was not an unqualified enthusiast.

He recognized the potential of capitalism for instability and the rise of absolutism.

Hume's imprint on modern economics is profound and far-reaching, both because of his influence on Adam Smith and Thomas Robert Malthus, and because of later admirers such as Friedrich Hayek and Paul Krugman.

This book by Schabas and Wennerlind compels us to reconsider the centrality and legacy of Hume's economic thought--for both his time and ours--and serves as an important springboard for reflections on the philosophical underpinnings of economics.