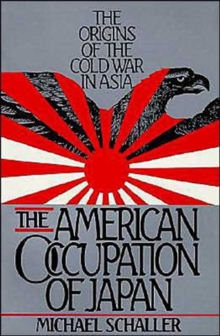 The American Occupation of Japan : The Origins of the Cold War in Asia

Michael Schaller argues that the reconstruction of postwar Japan not only shaped the future of that country, but also the future of U.S. policy throughout postwar Asia, leading up to the controversial interventions in China, Korea, and Vietnam.

In this detailed study, he shows how the U.S., after the war, sought to develop Japan as a stable bulwark against both Soviet expansion and Asian revolution.

In particular, he depicts the intense conflict that raged amongAmerican officials, with the flamboyant Occupation Commander, General Douglas MacArthur, against virtually all civilian and military planners in Washington, including President Truman.

Lauded by the public as a hero, and initially given free rein to shape the future of Japan, MacArthur was graduallyundermined in a series of bureaucratic and personal manoeuvres.

His plans were replaced by a new Occupation programme, which provided U.S. aid to rebuild Japan as a major industrial power at the hub of a subordinate Asian trading network.

This was done in the hope that Japan's regional dominance would simultaneously ensure recovery, bolster world trade, and stabilize the fragile arc of Southeast Asian states in transit from colonialism to independence.