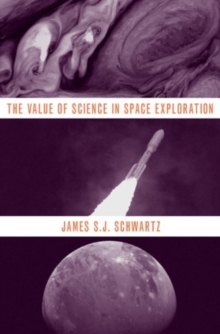 The Value of Science in Space Exploration

Space exploration, especially the recent push for the commercialization and militarization of space, is attracting increased attention not only from the wider public and the private sector but also from scholars in a wide range of disciplines.

At this moment of uncertainty about the future direction of national spaceflight programs, The Value of Science in Space Exploration defends the idea, often overlooked, that the scientific understanding of the SolarSystem is both intrinsically and instrumentally valuable.

Drawing on research from the physical sciences, social sciences, and the humanities, James S.J.

Schwartz argues further that there is truly a compelling obligation to improve upon our scientific understanding-including our understanding of spaceenvironments-and that there exists a corresponding duty to engage in the scientific exploration of the Solar System. After outlining the underpinning epistemological debates, Schwartz tackles how this obligation affects the way we should approach some of the major questions of contemporary space science and policy: Is there a need for environmental preservation in space?

Should humans try to establish settlements on the Moon, Mars, or elsewhere in the Solar System, and if so, how?

In answering these questions, Schwartz parleys with recent work in science policy and social philosophy of science to characterizethe instrumental value of scientific research, identifying space research as a particularly effective generator of new knowledge.

Additionally, whereas planetary protection policies are currently employed to prevent biological contamination only of sites of interest in the search forextraterrestrial life, Schwartz contends that all sites of interest to space science ought to be protected.

Meanwhile, both space resource exploitation, such as lunar or asteroid mining, and human space settlement would result in extensive disruption or destruction of pristine space environments.

At a time when it is particularly pertinent to consider the ways in which space exploration might help solve some of the world's ethical and resource-driven concerns,The Value of Science in Space Exploration is a thought-provoking and much-needed examination into the world of space.