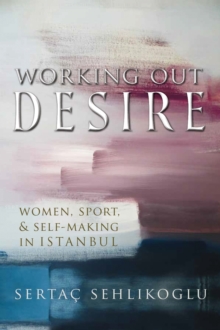 Working Out Desire : Women, Sport, and Self-Making in Istanbul

Part of the Gender, Culture, and Politics in the Middle East series

Working Out Desire examines spor meraki as an object of desire shared by a broad and diverse group of Istanbulite women.

Sehlikoglu follows the lat est anthropological scholarship that defines desire beyond the moment it is felt, experienced, or even yearned for, and as something that is formed through a series of social and historical makings.

She traces Istanbulite women's ever-increasing interest in exercise not merely to an interest in sport, but also to an interest in establishing a new self - one that attempts to escape from conventional feminine duties - and an investment in forming a more agentive, desiring, self.

Working Out Desire develops a multilayered analysis of how women use spor meraki to take themselves out of the domestic zone physically, emotionally, and also imaginatively. Sehlikoglu pushes back against the conventional boundaries of scholarly interest in Muslim women as pious subjects.

Instead, it places women's desiring subjectivity at its center and traces women's agentive aspirations in the way they bend the norms which are embedded in the multiple patriarchal ideologies (i.e. nationalism, religion, aesthetics) which operate on their selves.

Working out Desire presents the ways in which women's changing habits, leisure, and self-formation in the Muslim world and the Middle East are connected to their agentive capacities to shift and transform their conditions and socio-cultural capabilities.