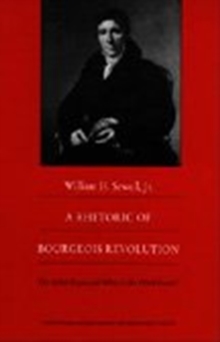 A Rhetoric of Bourgeois Revolution : The Abbe Sieyes and What is the Third Estate?

Part of the Bicentennial Reflections on the French Revolution series

What Is the Third Estate? was the most influential pamphlet of 1789. It did much to set the French Revolution on a radically democratic course.

It also launched its author, the Abbe Sieyes, on a remarkable political career that spanned the entire revolutionary decade.

Sieyes both opened the revolution by authoring the National Assembly's declaration of sovereignty in June of 1789 and closed it in 1799 by engineering Napoleon Bonaparte's coup d'etat. This book studies the powerful rhetoric of the great pamphlet and the brilliant but enigmatic thought of its author.

William H. Sewell's insightful analysis reveals the fundamental role played by the new discourse of political economy in Sieyes's thought and uncovers the strategies by which this gifted rhetorician gained the assent of his intended readers-educated and prosperous bourgeois who felt excluded by the nobility in the hierarchical social order of the old regime.

He also probes the contradictions and incoherencies of the pamphlet's highly polished text to reveal fissures that reach to the core of Sieyes's thought-and to the core of the revolutionary project itself.

Combining techniques of intellectual history and literary analysis with a deep understanding of French social and political history, Sewell not only fashions an illuminating portrait of a crucial political document, but outlines a fresh perspective on the history of revolutionary political culture.