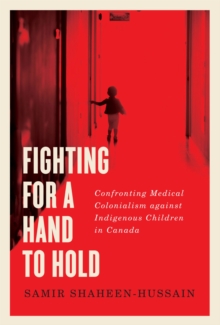 Fighting for a Hand to Hold : Confronting Medical Colonialism against Indigenous Children in Canada

Part of the McGill-Queen's Indigenous and Northern Studies series

Launched by healthcare providers in January 2018, the #aHand2Hold campaign confronted the Quebec government's practice of separating children from their families during medical evacuation airlifts, which disproportionately affected remote and northern Indigenous communities.

Pediatric emergency physician Samir Shaheen-Hussain's captivating narrative of this successful campaign, which garnered unprecedented public attention and media coverage, seeks to answer lingering questions about why such a cruel practice remained in place for so long.

In doing so it serves as an indispensable case study of contemporary medical colonialism in Quebec.

Fighting for a Hand to Hold exposes the medical establishment's role in the displacement, colonization, and genocide of Indigenous peoples in Canada.

This devastating history and ongoing medical colonialism prevent Indigenous communities from attaining internationally recognized measures of health and social well-being because of the pervasive, systemic anti-Indigenous racism that persists in the Canadian public health care system - and in settler society at large.

Shaheen-Hussain's unique perspective combines his experience as a frontline pediatrician with his long-standing involvement in anti-authoritarian social justice movements.

Sparked by the indifference and callousness of those in power, this book draws on the innovative work of Indigenous scholars and activists to conclude that a broader decolonization struggle calling for reparations, land reclamation, and self-determination for Indigenous peoples is critical to achieve reconciliation in Canada.