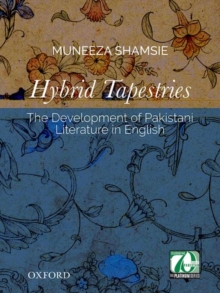 Hybrid tapestries : the development of Pakistani literature in English

By: Shamsie, Muneeza (Writer and critic)

Hybrid Tapestries provides an extensive historical map of Pakistani English literature: it traces the narrative to its multiple origins, including pre-colonial and colonial contacts, and moves across the twentieth century to extraordinary new talent.

The book singles out thirteen innovative writers for a detailed chapter on each, beginning with those who became Pakistanis after Partition (such as Shahid Suhrawardy and Ahmed Ali) but who had published major worksprior to Independence.

Due acknowledgement is also given to the two forgotten writers of that era: Atiya and Samuel Fyzee Rahamin.

It includes and unites a wide range of English language writers in Pakistan with those living in the diaspora.

These are underpinned by an extensive discussion onessays, letter writing, and memoirs, including the letters of Faiz Ahmed Faiz and Aly Faiz; essays of Anwer Mooraj, Moni Mohsin, and Eqbal Ahmed; travelogues of Salman Rashid; and memoirs of Firoz Khan Noon, Tehmina Durrani, Kamran Nazeer, and others.

The book also brings new perspectives and criticalwritings on the diverse socio-political reasons for the emergence of a Pakistani national literature in English.