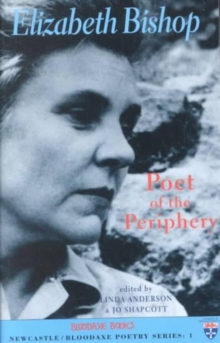 Elizabeth Bishop : poet of the periphery

Elizabeth Bishop is one of the greatest poets of the 20th century.

When she died in 1979, she had only published four collections, yet had won virtually every major American literary award, including the Pulitzer Prize.

She maintained close friendships with poets such as Marianne Moore and Robert Lowell, and her work has always been highly regarded by other writers.

In surveys of British poets carried out in 1984 and 1994 she emerged as a surprising major choice or influence for many, from Andrew Motion and Craig Raine to Kathleen Jamie and Lavinia Greenlaw.

A virtual orphan from an early age, Elizabeth Bishop was brought up by relatives in New England and Nova Scotia.

The tragic circumstances of her life - from alcoholism to repeated experiences of loss in her relationships with women - nourished an outsider's poetry notable both for its reticence and tentativeness.

She once described a feeling that 'everything is interstitial' and reminds us in her poetry - in a way that is both radical and subdued - that understanding is at best provisional and that most vision is peripheral.

Millier's important biography (1993). In America, there have been numerous critical studies and books of academic essays, but in Britain only studies by Victoria Harrison (1995) and Anne Stevenson (1998) have done anything to raise Bishop's critical profile. "Elizabeth Bishop: Poet of the Periphery" was the first collection of essays on Bishop to be published in Britain, and draws on work presented at the first UK Elizabeth Bishop conference, held at Newcastle University.

It brings together papers by both academic critics and leading poets, including Michael Donaghy, Vicki Feaver, Jamie McKendrick, Deryn Rees-Jones and Anne Stevenson.