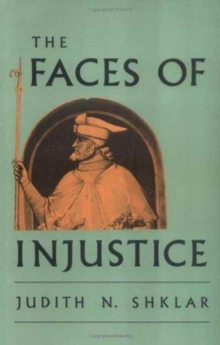 The faces of injustice

Part of the The Storrs Lectures series

How can we distinguish between injustice and misfortune?

What can we learn from the victims of calamity about the sense of injustice they harbor?

In this book a distinguished political theorist ponders these and other questions and formulates a new political and moral theory of injustice that encompasses not only deliberate acts of cruelty or unfairness but also indifference to such acts.

Judith N. Shklar draws on the writings of Plato, Augustine, and Montaigne, three skeptics who gave the theory of injustice its main structure and intellectual force, as well as on political theory, history, social psychology, and literature from sources as diverse as Rosseau, Dickens, Hardy, and E.

L. Doctorow. Shklar argues that we cannot set rigid rules to distinguish instances of misfortune from injustice, as most theories of justice would have us do, for such definitions would not take into account historical variability and differences in perception and interest between the victims and spectators.

From the victim's point of view-whether it be one who suffered in an earthquake or as a result of social discrimination-the full definition of injustice must include not only the immediate cause of disaster but also our refusal to prevent and then to mitigate the damage, or what Shklar calls passive injustice.

With this broader definition comes a call for greater responsibility from both citizens and public servants.

When we attempt to make political decisions about what to do in specific instances of injustice, says Shklar, we must give the victim's voice its full weight.

This is in keeping with the best impulses of democracy and is our only alternative to a complacency that is bound to favor the unjust.