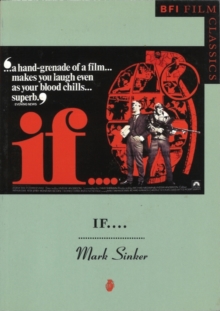 Lindsay Anderson's film if.... (1968), starring Malcolm McDowell as a schoolboy who leads a guerilla insurgence, imagines how repression, conformity, and fusty ritual at an English public school could lead to anarchy and bloody revolt.

Its title is a sardonic nod to Rudyard Kipling's most famous poem, and its story a radical updating of Kipling's 1899 story "Stalky and Co.," in which prankish rebels are groomed to police the empire.

Released at a time of unprecedented student uprisings in Europe and America, if.... provided a peculiarly English perspective on the battle between generations - the perennial war of the romantically passionate against the corrupt, the ugly, the old, and the foolish.Though its emotional surface is authentically anti-authoritarian, its intellectual substance, as Mark Sinker argues, is rooted in a deep familiarity with the symbols of English ruling-class values.

No longer a vehicle for shock or dissent, if.... is today enjoyed comfortably, even nostalgically, but for Sinker this renders its many knots and paradoxes, the moments of poetry that Anderson argued were cinema's raison d'etre, all the more fascinating.