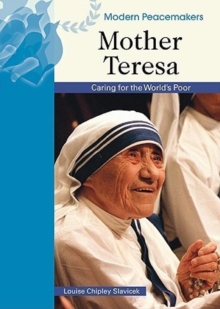 Part of the Modern Peacemakers series

Mother Teresa is one of the most admired Nobel laureates of all time.

Born in Eastern Europe of Albanian parents, she became a Catholic missionary nun in India when she was still a teenager.

After teaching in a convent school in Calcutta for nearly two decades, in 1946 she claimed that she heard God calling her to live and work among ""the poorest of the poor"" in that city's slums.

With the assistance of the religious order she founded, the Missionaries of Charity, over the next half-century Mother Teresa devoted herself to society's forgotten and unwanted, not only in India but in countries all over the globe.

In recognition of her selfless efforts on behalf of the world's suffering, Mother Teresa received numerous honors during her lifetime, including the prestigious Nobel Peace Prize, which she was awarded in 1979. ""Mother Teresa"" is a stirring biography of a woman who gave voice to those most often ignored and neglected by society at large, and whose name has forever become synonymous with tireless charity.