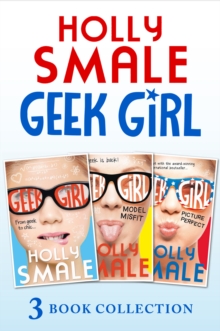 "My name is Harriet Manners, and I am a geek."

Geek Girl:
Harriet Manners knows that a cat has 32 muscles in each ear, a "jiffy" lasts 1/100th of a second, and the average person laughs 15 times per day.

But she doesn't know why nobody at school seems to like her.

So when Harriet is spotted by a top model agent, she grabs the chance to reinvent herself.

She also knows that Geek + Model = a whole new set of graffiti on your belongings.

But Harriet doesn't know where she's going to fit in once the new baby arrives. And with her summer plans ruined, modelling in Japan seems the perfect chance to get away.

Will geek girl find her place on the other side of the world?

Picture Perfect:
Harriet Manners knows that New York is the most populous city in the United States.

She knows that its official motto is 'Ever Upward'.

But she knows nothing whatsoever about modelling in the Big Apple and how her family will cope with life stateside. Or 'becoming a brand' as the models in New York say. And even more importantly, what to do when the big romantic gestures aren't coming your way from your boyfriend.

Does geek girl go too far this time?

The award-winning debut, GEEK GIRL, and brilliant follow-up titles in the bestselling series by Holly Smale.