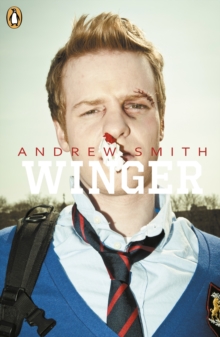 Part of the Winger series

Ryan Dean West is a fourteen-year-old boy at a boarding school for rich kids.

He's living in Opportunity Hall, the dorm for troublemakers, and rooming with the biggest bully on the rugby team. And he's madly in love with his best friend Annie, who thinks of him as a little boy. With the help of his sense of humour, rugby buddies, and his penchant for doodling comics, Ryan Dean manages to survive life's complications and even find some happiness along the way.

But when the unthinkable happens, he has to figure out how to hold on to what's important, even when it feels like everything has fallen apart. Filled with hand-drawn illustrations and told in a pitch-perfect voice, this realistic depiction of a teen's experience strikes an exceptional balance of hilarious and heartbreaking. - Publishers Weekly Best Books of 2013- Amazon's Top 20 YA Books of 2013- Publishers Weekly Top 10 Summer Reads of 2013- ALA/YALSA nominee for "Best Fiction for Young Adults 2014"- 2014 Rainbow List NomineeAndrew Smith knew ever since his days as editor of his high school newspaper that he wanted to be a writer.

There, he got his first 'real job', as a teacher in an alternative educational program for at-risk teens, married, and moved to a rural mountain location where he lives with his wife, two children, two horses, three dogs, three cats and one irritable lizard named Leo.