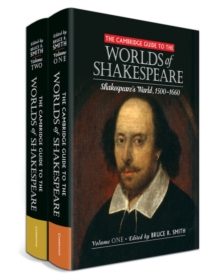 In pursuit of that vision, this work is transhistorical, international and interdisciplinary.

Volume 1, Shakespeare's World, 1500-1660, includes a comprehensive survey of the world in which Shakespeare and his contemporaries lived, while Volume 2, The World's Shakespeare, 1660-Present, examines what the world has made of Shakespeare as a cultural icon over the past four centuries.

For each of the work's twenty-eight broad subject areas, ranging from translation to popular culture to performing arts, an overview is followed by a series of shorter essays taking up particular aspects of the subject at hand.

Richly illustrated with more than three hundred images between the two volumes, this work brings the world, life and afterlife of Shakespeare to readers, from non-academic Shakespeare fans and students to theater professionals and Shakespeare scholars.