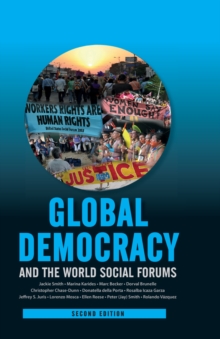 The World Social Forum quickly became the largest political gathering in human history and continues to offer a direct challenge to the extreme inequities of corporate-led globalisation.

It has expanded its presence and continues to be an exciting experiment in global and participatory democracy.

The book's contributors have participated in World Social Forums around the globe.

Recounting dozens of dramatic firsthand experiences, they draw on their knowledge of global politics to introduce the process, its foundations and relevance to ongoing transnational efforts toward democracy.

This second edition of Global Democracy shows how the Forums have developed since their inception in 2001 and how they are now connected with other global movements including Occupy, the Arab Spring and beyond.