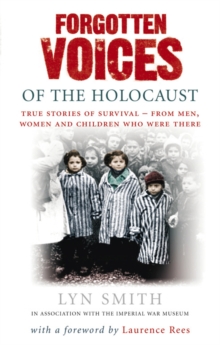 Forgotten voices of the Holocaust

Following the success of "Forgotten Voices of the Great War" the series now chronicles one of human histories darkest hours.

The author comes to the project following her significant work in recording the experiences of Holocaust survivors for the Imperial War Museum sound archive - one of the most important archives of its kind in the world.

The intertwined moving and revealing interviews reveal the sheer complexity and horror of the Holocaust.

The great majority of survivors suffered considerable physical and psychological wounds, yet the overall story is far from being just gloom and doom.

There are many poignant vignettes describing acts of charity, reciprocity and kindness in the face of the most extreme form of barbarism.

As well as revealing the story of the Holocaust as directly experienced by victims, these testimonies also illustrate how, even enduring the most harsh and degrading conditions and treatment as well as suffering massive family losses, hope, the will to survive and the human spirit shines through.